AC Milan continue their bid to qualify for next season's Europa League. Seven-time European champions Milan have failed to hit the heights.

Milan: Carlos Bacca’s first-half penalty secured a precious 1-0 win at Bologna as struggling Serie A giants AC Milan continue their bid to qualify for next season’s Europa League. Seven-time European champions Milan have failed to hit the heights for the past few seasons and owner Silvio Berlusconi said last week he is ready to sell the club to “the right buyer, preferably an Italian”. In the meantime, the Rossoneri are battling to beat Sassuolo to finish in sixth place — which will be bestowed a Europa League spot if champions Juventus beat Milan in the Italian Cup final. Bologna have secured top flight football for next season under Roberto Donadoni, who was parachuted in last October as the club plummeted under the guidance of Delio Rossi.

But their bid to win their final home game of the season suffered a blow when Guinean midfielder Amadou Diawara saw red for a second bookable offence after just 12 minutes at the Stadio Dall’Ara. Having been cautioned for an altercation with Jose Mauri, Diawara was given his marching orders after ploughing through Milan captain Riccardo Montolivo minutes later. Yet in a scrappy game of few real chances yesterday, it took Bacca’s 40th minute spot-kick — after goalkeeper Angelo Da Costa hauled down Luiz Adriano in the area — to seal the points.

Milan moved up one place to sixth, two points ahead of Sassuolo before they visit relegation-haunted Frosinone on Sunday. Earlier, Mauro Icardi hit the opener but then hobbled off injured in a 2-1 win over Empoli that secured fourth spot for Inter Milan and direct entry to next season’s Europa League. Inter’s faint hopes of returning to Europe’s premier club competition were ended by a 2-0 defeat at Lazio last week, where Icardi was among Inter’s misfiring players.

The Argentine hobbled off just after the hour on Saturday with a knock that is expected to sideline him for next week’s trip to Sassuolo, a match keeper Samir Handanovic and winger Ivan Perisic will miss through suspensions after picking up late bookings for time-wasting. Inter coach Roberto Mancini, meanwhile, admitted their absence from Europe’s top table next season weighs heavily.

“It’s weighing on everyone the fact we won’t be playing in it,” said Mancini, who won seven trophies including three consecutive league titles in his previous spell at the club in 2004-2008. In 2010 Inter clinched the treble, and Mancini added: “As a club, the Champions League is a competition Inter should always be involved in.” Inter had the perfect start, Icardi firing first-time into the roof of the net on 12 minutes from Perisic’s smart pull-back.

Empoli reduced the arrears eight minutes before the interval thanks to Manuel Pucciarelli, but just three minutes later Perisic tapped home the rebound after keeper Alberto Pelagotti spilled Stevan Jovetic’s shot. In the end Inter were thankful for the points after Pucciarelli was ruled offside after drilling into the roof of the net and Andrea Costa saw a bouncing volley go just wide of Handanovic’s post.

“We should have taken a lot more from this game, but we’ll keep on plugging away playing and enjoying ourselves playing the football we play,” said Empoli coach Marco Giampaolo. On Sunday, champions Juventus are away to relegated Verona in what will be home striker Luca Toni’s final fixture after 22 years as a professional. Roma win at home to Chievo in today’s early game would send Luciano Spalletti’s men up to provisional second place with a one-point lead on fellow Champions League qualification rivals Napoli, who travel to Torino later in the day. 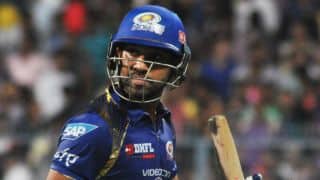