Lionel Messi, Luis Suarez and Neymar score one goal each to beat Arsenal 3-1 in the second leg.

Madrid: FC Barcelona’s Lionel Messi, Luis Suarez and Neymar scored one goal each to give the reigning European Champions a 3-1 win and a 5-1 aggregate win over Arsenal in the last 16 of the Champions League. The win means Barca have reached the last eight of the competition for the last 9 years, while Arsenal have fallen at the last 16 stage for every year since the 2010-11 season, Xinhua news agency reported on Thursday.
Barcelona fielded their strongest available side with Jeremy Mathieu in for the suspended Gerard Pique, while Arsenal coach Arsene Wenger surprisingly included 19-year-old midfielder Alex Iwobi in his side along with Egyptian, Mohamed Elneny. Leo Messi had already given Arsenal a warning on 16 minutes when he took Neymar’s deep pass before drawing a miraculous save from David Ospina, but the Colombian goalkeeper could do nothing two minutes later when Neymar opened the scoring.

Luis Suarez gave a diagonal pass which allowed the Brazilian to get in behind the Arsenal defense and make the aggregate score 3-0 with a low finish. Barca had the control of the ball and although Arsenal defended well, the impression was of a side playing ‘cat and mouse’ with their rival, although Iwobi showed drive with a shot over the crossbar.Arsenal came into the game in the last five minutes of the first half, but despite causing a few nervous moments for the Barca defense, they failed to draw a save out of Ter Stegen.

Stegen still had not made a save in the 51st minute when Elneny gave Arsenal hope with a lovely goal from outside of the area which gave the Barca keeper no chance. Messi responded with a diagonal shot following a Neymar backheel which Ospina did well to save, while at the other end a desperate block from Javier Mascherano stopped Danny Welback’s goal-bound shot.Suarez put Barca’s qualification beyond doubt with a spectacular volley in the 65th minute. The Uruguayan, who was one wanted by Arsenal, managed to get his foot around a Dani Alves cross to leave Ospina helpless. 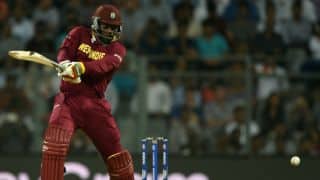