Arsene Wenger says Mesut Ozil holds the key to Arsenal's hopes of winning the Premier League for the first time in 12 years.

London: Arsene Wenger says Mesut Ozil holds the key to Arsenal‘s hopes of winning the Premier League for the first time in 12 years. Ozil’s superb run of form has been the catalyst for Arsenal’s climb to the top of the Premier League table heading into 2016. The 27-year-old German midfielder has been immaculate in recent weeks and has already notched up a league leading 16 assists this season. The latest came in Monday’s 2-0 win over Bournemouth, with Ozil then adding the second goal himself. “He is a complete athlete. I also believe he has grown in stature and takes responsibilities and leadership in the team,” Gunners boss Wenger said ahead of Saturday’s clash with Newcastle United at the Emirates Stadium.

“On that front he has improved tremendously and looks determined to lead the team compared to when he arrived. I think he plays in a position that suits him well. This season he was not stopped by injuries and I believe that he arrives at an age — 27 — that you think ‘it’s time for me to really be efficient in every single game, and I want to enjoy every single game’.”

Arsenal continue to nurse frailties of their own, as shown by their 4-0 Boxing Day drubbing at Southampton, but the Bournemouth win was enough to take them top of the table on goal difference after former leaders Leicester City could only draw 0-0 with Manchester City. Leicester lost 1-0 at Liverpool prior to Tuesday’s goalless stalemate with City, but manager Claudio Ranieri says that his players are determined not to let their early-season momentum peter out.

“We’ve had a fantastic half-season, it’s unbelievable what we are doing and we must continue,” said the Italian, whose team welcome Bournemouth to the King Power Stadium. “We will fight right until the end and we want to win. If we give 100 percent, then we accept every result.” Manchester City, three points off the pace in third place, continue to oscillate between the sublime and the ridiculous and have gone 10 league games without recording back-to-back victories.

Against Watford they will once again be without skipper Vincent Kompany, after he aggravated a calf injury during the 4-1 Boxing Day win over Sunderland, and manager Manuel Pellegrini admits that he is desperate to get to the bottom of the influential centre-back’s injury problems. “We are trying to do all [we can] to know how we can help Vincent to try to be fit and not to continue with the same calf problems,” the Chilean told his pre-match press conference on New Year’s Eve. Everything the club can do, we are going to do it.”

City’s travails have given hope to Tottenham Hotspur, who are just a point behind them in fourth place prior to their trip to Everton on Sunday, when they will be chasing a fourth successive league win. Spurs’ form is also of concern to both Liverpool and United, who find themselves five points off the Champions League places at the season’s halfway stage. Speculation about United manager Louis van Gaal’s future has quietened down since Monday’s 0-0 draw with Chelsea, but the volume will rise quickly if his side fail to produce an adequate performance at home to Swansea City, who have won the last three encounters between the teams.

“We have to get points, otherwise the gap is too big and that is why we have to do what we have to do. We have to work, prepare the game, perform and then evaluate the game again. That is of course much more difficult when you don’t win than when you win,” Van Gaal said. Champions Chelsea, three points above the relegation zone, visit fifth-place London rivals Crystal Palace on Sunday with Guus Hiddink still seeking the first win of his second stint as interim manager. Meanwhile, neither bottom club Aston Villa nor second-bottom Sunderland can afford defeat in their showdown at the Stadium of Light, with the two teams respectively 11 and seven points from safety. Pakistan to use pink-balls for First-Class final 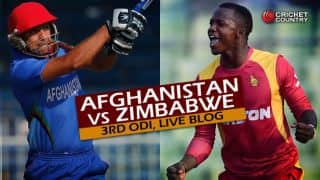