The absence of an under-the-weather Lionel Messi and the injured Luis Suarez didn’t seem to dampen the enthusiasm of the roughly 40,000 Barcelona fans who gathered at the Camp Nou stadium to celebrate the club’s La Liga title and Copa del Rey triumph. The stadium lights dimmed on Monday night and the projection of a video on the 2015-2016 season was followed by a spectacular fireworks display as a prelude to the introduction of the coaching staff and players, reports Efe. Almost all of the players were accompanied onto the pitch by their children.

With neither Suarez or Messi present, the largest ovations went to head coach Luis Enrique Martinez and players Gerard Pique, Neymar and Andres Iniesta, the team captain. As a special tribute to Iniesta, all his teammates were sporting Barcelona jerseys bearing the number 28 – for the 28 titles he has won with the club – and the phrase “Rey de Copas” (King of Cups).

Displayed on the field were the four trophies Barcelona won in 2015-2016: La Liga, the Copa del Rey, the European Super Cup and the Club World Cup. “We have won a lot, but we want to continue to win a lot and make history again,” Iniesta told the crowd. “We will be here again next year.” UEFA Champions League 2015-16 Final: Pepe says there is 'no favourite' 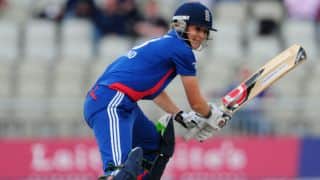 Charlotte Edwards to commentate in England vs Pakistan Women series