Brazil football legend Pele is all set to auction off a vast collection of memorabilia accumulated throughout his illustrious career including medals from his World Cup triumphs and Jules Rimet trophy.

London: Brazil football legend Pele is all set to auction off a vast collection of memorabilia accumulated throughout his illustrious career. The three-time World Cup winner will put over 2,000 items under the hammer here next month. Pele’s medals from those World Cup triumphs will be included, including the Jules Rimet trophy which was permanently awarded to Brazil after their success at the 1970 World Cup in Mexico. Potential investors can also bid for jerseys worn by Pele during his career and the ball with which he scored 1,000th goal of his career while playing for Santos against Vasco da Gama in 1969.

The other items to go under the hammer are 1977 NY Cosmos NASL Championship ring, L’Equipe Athlete of the Century award, 1958 Brazil World Champion sash, Santos World Club Champions sash and Game-worn New York Cosmos jersey. The sale will take place over three days in London in June, and covers the six decades from Pele’s signing for Santos as a 15-year-old in 1956. It was a difficult decision to make but it takes a lot to properly care for these artefacts,” Pele was quoted as saying by the BBC on Tuesday.

“And I felt I could do much more good by sharing these items with the world, as well as helping my causes that are important to me.”Beverly Hills-based auction house Julien Auctions will handle the sale — which will run for three days from June 7 — with a portion of the proceeds to be donated to charity. “I have decided to allow fans and collectors to own a piece of my history as well,” Pele added.

“I hope they treasure these artefacts and share my story with their children and generations to come.” 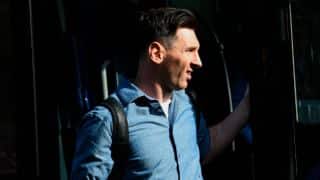