Carlos Bacca struck on either side of the halftime as Colombia defeated Ecuador 3-1 in their World Cup football qualifier.

Barranquilla (Colombia): Striker Carlos Bacca struck on either side of the halftime as Colombia defeated Ecuador 3-1 in their World Cup football qualifier. The AC Milan striker opened the scoring in stifling heat at the Estadio Metropolitano on Tuesday, receiving a James Rodriguez pass and turning skilfully around his marker before lashing a shot into the bottom corner, reports Xinhua news agency. Sebastian Perez doubled the hosts’ lead just after halftime, acrobatically toe-poking in an Edwin Cardona cross. Real Madrid midfielder Rodriguez tormented Ecuador for most of the match and he was involved in his team’s third goal when his slick exchange with Juan Cuadrado ended in an easy tap-in for Bacca.

The victory was Colombia’s second in six days after their 3-2 defeat of Bolivia in La Paz. Jose Pekerman’s side have collected 10 points from six matches while Ecuador, who won each of their previous four qualifiers before the current round of fixtures, have 13 points. The top four teams at the end of the South American zone’s two-year qualifying campaign will earn an automatic place at the 2018 World Cup in Russia. The fifth-ranked team will advance to the playoffs. 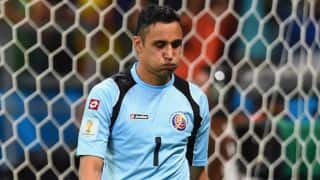