Cardiff: Wales football team’s manager Chris Coleman has said Arsenal midfielder Aaron Ramsey is as big a player as his star forward Real Madrid’s Gareth Bale, both of whom will be seen in action in the upcoming Euro 2016. “He’s [Ramsey] as big for us as anyone,” Coleman was quoted as saying by goal.com on Thursday. “Aaron could go under the radar because of Gareth, but I think it’s good for him. Gareth doesn’t care, he’s got that personality where he just gets on with it and it’s good for Aaron – if he’s under the radar he won’t have a problem with that.”

“All I expect from Aaron is just to be Aaron Ramsey on the pitch for us, because there’s no one like him.” Coleman also feels that when Ramsey is in top form he can easily outwit the opposition with his skills and do things other footballers cannot. “For us, he gives us something that we haven’t got. He can do things in the position he plays in that other players can’t do. He can start play on the edge of our box and he can finish it off on the edge of the opposition box,” Coleman said.

“When you’ve got the imagination he has and you’ve got the confidence he has, when you try something it’s not always going to come off. But when it comes off, he can open doors that nobody else can.” Wales are placed in Group B alongside England, Russia and Slovakia, who they meet in their first encounter on June 11. 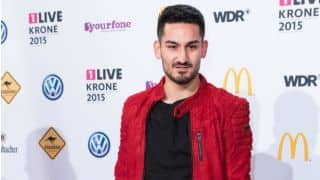