National football team coach Stephen Constantine today lashed out at his players after India lost to Turkmenistan 1-2 to end at the bottom of their group in the 2018 World Cup qualifiers.

Kochi: National football team coach Stephen Constantine today lashed out at his players after India lost to Turkmenistan 1-2 to end at the bottom of their group in the 2018 World Cup qualifiers, saying that they deserved to be beaten with the kind of play they dished out. India squandered a 1-0 lead to lose the match and a disappointed Constantine said there was no excuse for the poor show from his players. “There are no excuses. To be honest, we started very poorly and if we look at ourselves, we got exactly what we deserved from the game,” he said at the post-match press conference.

India ended their World Cup qualification campaign at the bottom of the five-team Group D with just three points with a lone win over Guam in their home leg match last year. The tiny Pacific nation of Guam finished ahead of India at fourth with seven points while Turkmenistan were third with 13 points. Maintaining possession seemed an impossible task for the Indian team, even at the pedestrian pace at which they played.

“Our stats suggest that a player gave away the ball 17 times. You cannot do that at any level, and here we are playing at the international level,” said Constantine. The weather in Kochi was humid but as the match progressed Turkmenistan, much to everyone’s surprise, seemed to be more at home than the Indians. “We need to take a look at ourselves and see what and how we can get better. Perhaps, we gave more than we had in the match against Iran and maybe, four days later we can’t cope with two matches being played after four days,” he stated.

“The GPS suggest that the fitness levels in the second half were considerably down from what we had in the first half but we did not play well in either half,” he added. India were further dented by the absence of captain Sunil Chhetri who was confined to the bench as he did not recover fully from an injury.

“I am not the kind of coach to play a player who is injured. He is recovering from an injury that he had for quite some time. I could have easily played him for the last 15 minutes but that would have risked him for the next six months,” Constantine said. 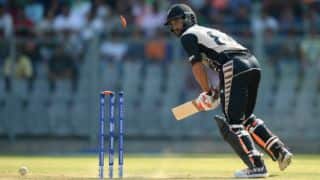 Badminton: Going through most challenging phase of my career, says Saina Nehwal