Lionel Messi came on after the first-half and couldn't find the back of the net as all the goals were scored before he came on.

Argentina eased to a 3-0 victory over Bolivia in a Group D clash of the Copa America Centenario football tournament at the Century Link Stadium here on Wednesday. All the goals came in the first half with Erik Lamela (13th minute), Ezequiel Lavezzi (15th) and Leandro Cuesta (32nd) finding the target. Wednesday’s win ensured that Argentina finished their group engagements at the top of Group D. The 14-time Copa America champions have bagged the full nine points having won all their three group matches. Argentina will now meet Venezuela in the quarter-finals on Saturday. Argentina’s performance is even more creditable given the fact that they were without a host of starting XI players.

Coach Gerardo Martino chose to leave several first choice players including Marcos Rojo, Augusto Fernandez, Javier Mascherano and Nico Gaitan on the bench, in order to eliminate chances of them picking up another yellow card which would have ruled them out of the quarter-finals.

Angel Di Maria and Gabriel Mercado were also missing due to injury. Martino also kept the talismanic Lionel Messi on the bench for the first 45 minutes.

All that, however, did not have any effect on Argentina’s performance on the field.

Playing with a 4-5-1 formation with the experienced Gonzalo Higuain as the lone centre-forward and Lavezzi and the impressive Sergio Aguero on the wings, the ‘Albecieste’ ran the Bolivia defence ragged with a steady flow of attacks.

Bolivia coach Julio César Baldivieso understandably opted for a defensive formation with a five-man defence including three central defenders. But that was never going to stop Argentina.

Lamela opened the scoring with a free-kick which took a lucky deflection off the defensive wall. Bolivia goalkeeper Carlos Lampe had dived the correct way initially, but was left stranded by the deflection and could only watch helplessly as the ball flew in at the far post.

Lavezzi scored just two minutes later. Matías Kranevitter’s cross was met with a header by Gonzalo Higuain at the far post. Lampe fumbled what should have been a relatively easy save and Lavezzi pounced on the rebound to double Argentina’s lead.

Cuesta then scored his first international goal in his first start for his national team just after the half-hour mark as Argentina went into the break with a formidable lead.

With Messi taking to the field after half-time, Argentina dominated the second half as well, but a combination of desperate defending by Bolivia and poor finishing meant the scoreline remained unchanged. 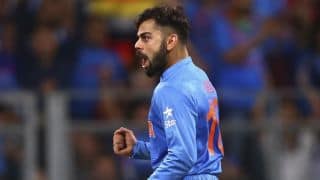