Copa America 2016 Final, Argentina vs Chile, Live Streaming: Watch Live Telecast on Sony ESPN at 05:30am i
By CricketCountry Staff

Chile face Argentina in Sunday’s Copa America final for the right to call themselves South America’s dominant team but perhaps an even bigger question for football fans the world over regards whether Lionel Messi can finally win a major international title. The streaming of the match will be available on Sonyliv.com and telecast will be available on Sony ESPN. The Barcelona forward has won every trophy possible with the Spanish club but he has lost three finals with Argentina, including in 2014 World Cup Final in 2014 and the Copa America last year. Sunday’s game against Chile in New Jersey gives Messi a chance to end both his personal hoodoo and that of Argentina, who have not won a major title since lifting the Copa America in Ecuador in 1993.

Argentina lost to Chile on penalties in the final last year and Messi said the squad were better prepared this time around. The five-times world player of the year has been outstanding at the Centenary Copa America, even though he played the first three games as a substitute after injuring his back in a warm-up game. Messi called the performance against the U.S. “perfect” and he will not have forgotten that Argentina beat Chile 2-1 in their opening match on June 6.  However, the Chileans have improved since, beating Bolivia and Panama before hammering Mexico 7-0 in what was undoubtedly the performance of the tournament. 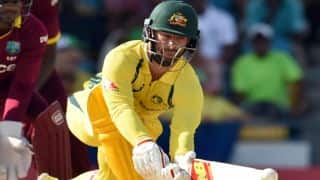