Peru struck twice early but Ecuador gathered themselves and rallied with two strikes of their own to force a 2-2 draw.

Phoenix (Arizona): Peru struck twice early but Ecuador gathered themselves and rallied with two strikes of their own to force a 2-2 draw in the second Group B Copa America Centenario football match for both teams. Christian Cueva scored in the fifth minute and Edison Flores in the 13th, both assisted by Paolo Guerrero here on Wednesday. Guerrero was difficult to mark for Ecuador’s defence in the first half. Cueva’s turn with the ball sent defender Gabriel Achilier to the ground and freed the Peru attacker to place the ball past Ecuador goalkeeper Alexander Dominguez. Peru looked to be in control when Flores scored but Ecuador battled back. Antonio Valencia chipped to Enner Valencia, who chested the ball down and slid the into the net to cut the lead in half in the 39th minute.

Ecuador’s momentum carried over into the second half.  In the 48th minute, Jefferson Montero completed a combination of passes by tapping the ball back to Miler Bolanos, who finished from close range to lock the score at 2-2. Peru’s Raul Ruidaz had one last shot just before the final whistle but it went wide. Achilier was given a red card for his second yellow card offence. Peru held on for a draw and with four points are in second place in the group behind Brazil on goal difference.

Ecuador came back from an 0-2 deficit in a Copa America match for the first time since 1983 against Argentina. Ecuador is at third spot with two points. They take on Haiti on Sunday in East Rutherford. Peru meets Brazil in Foxborough the same night. 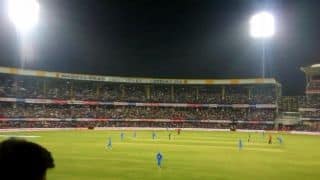