Copa Amera 2016 marks the 100th year and is being held at different parts of USA.

This tournament marks the 100th year of the tournament and is staged in the USA. North American teams were also invited to be a part of this month-long football fest. For the first time, 16 teams will be participating in the tournament, divided into four groups each. The final of the tournament will be played in New Jersey. The tournament saw a couple of inconsequential games on Tuesday and the results had not effect on the table. Luis Suarez might have been livid with his Uruguayan side but the 2011 winners responded with a comprehensive win against Jamaica in the dead rubber.

Mexico and Venezuela played out a draw; both teams had already secured a draw. The match lacked intensity and bite. Earlier, Ecuador registered a thumping 4-0 win agains lowly Haiti, who were well and truly the whipping boys of the group to progress to the next stage of the competition. Argentina were buoyed by Lionel Messi coming into the tournament for the first time and plundering a hat-trick, barely 30 minutes after coming on. . The Uruguayans had Luis Suarez were booted out of the tournament, even before things had started. As for the Pichichi winner, he has barely kicked a ball in the tournament and needed his side to get past the group stages for him to come into his own in the tournament.

Kindly Note: The table was updated after the match between Chile and Panama on Tuesday, June 14 that was won by Chile with 4 goals against Panamas 2 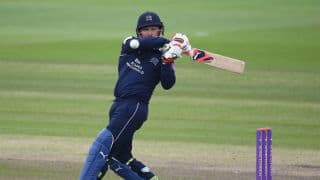