Chicago: Injured midfielders Alexis Sanchez and Marcelo Diaz remained on the sidelines here during Chile football team’s first practice for their Copa America semi-final against Colombia. During the 15 minutes of the session that was open to the press on Monday, Alexis sat on the bench and Diaz jogged around the perimeter of the pitch while their teammates worked out with the ball, reports Efe. The two midfielders suffered minor injuries in Chile’s 7-0 quarter-final rout of Mexico last Saturday. Both the Chilean and Colombian national sides are training on the campus of the University of Illinois at Chicago ahead of Wednesday’s contest at Soldier Field in the Windy City. The victor in that match will go on to face the winner of Tuesday’s United States-Argentina semi-final, set for NRG Stadium in Houston. 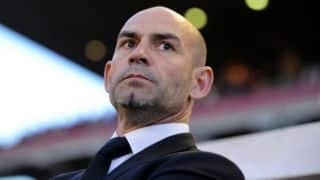