Manchester: Former Manchester United forward Louis Saha believes that the club should buy Everton striker Romelu Lukaku next summer in order to strengthen their presence upfront. The Belgium international is the second highest scorer in the English Premier League this season so far, with 18 strikes from 28 appearances. Saha is quite impressed with the form of the 22-year-old who has made his loan spell with Everton permanent. He was with Chelsea from 2011 to 2014. “I rated him highly when he was at Chelsea, when he was young. I could see he was not ready but now he has performed really well at Everton,” Saha was quoted as saying by the Independent on Wednesday.

“Definitely, he will bring something to the United side because he is strong, he has got that presence to trouble the central defenders.” With someone like Lukaku on United’s side, especially his presence around the box, along with (Anthony) Martial playing on the left and (Wayne) Rooney also linking with Lukaku, it will be great,” he added.

Over the course of his two-and-a-half years at Goodison Park, Lukaku has scored a total of 59 goals in 116 games. This season, Lukaku is second only to Leicester City striker Jamie Vardy, who has netted 19 goals so far. Everton coach Roberto Martinez has squashed reports of Lukaku being offered a hefty price tag in January and added the striker is only keen on scoring more goals for the club.

“With Rom (Lukaku), the only thing that interests me is his next target. He wants to score goals, he wants to become better,” Martinez said.

“I think it’s been a fantastic journey in the last 13 months. You have seen an evolution in his play that has been quite magnificent. He has been reliable, consistently there, a focal point for us and all I’m looking at is for him to carry on becoming even better,” he concluded.

Breaking News: It was Rohit Sharma's decision to shift India-Pakistan clash to Eden Gardens from Dharamsala 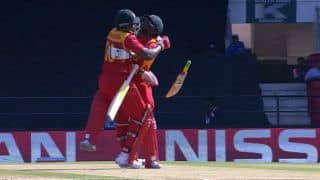