World Champions Germany pulled out the right cards to trump Slovakia 3-0 and enter the quarterfinals of the Euro 2016 here on Sunday. Jerome Boateng scored the opener in the 8th minute of the game which was followed by strikes from Mario Gomez (43) and Julian Draxler (63) in the round of 16 tie at the Stade Pierre-Mauroy. Germany tried attacking from the outset and Sami Khedira almost gave them the lead in the sixth minute but Slovakia goalkeeper Matus Kozacik was well positioned to thwart away his header. A little later however, Boateng found the back of the net with a crisp volley.

It was a corner kick which was cleared till the edge of the box and the centre-back let loose a strong shot which was enough to beat Kozacik.

Germany kept on the pressure and had a chance to double their lead in the 12th minute. Mario Gomez was brought down in the area and they were awarded a penalty.

Mesut Ozil stepped up and let one fly of his left boot but Kozacik guessed it right and was able to palm away the strike diving to his left.

Germany had two more chances to grab a two goal cushion but both Thomas Mueller and Ozil’s efforts fizzed wide off target.

Slovakia had their moment in the 41st minute but Juraj Kucka’s header was brilliantly tipped over the bar by German custodian Manuel Neuer.

At the other end though, a few minutes later Gomez scored from close range. But the gigantic striker was set up by Draxler who delivered a pin-point pass after a delightful run.

Slovakia tried upsetting the German tempo by bringing in Jan Gregus but it did not work either. Germany still looked menacing everytime they were on the ball.

Just after the hour mark Draxler made sure his side had their third, as he volleyed home from close using great technique.

All Germany had to do in the last 20 minutes or so was to not give too much possession away and that is precisely what they did to seal the victory. 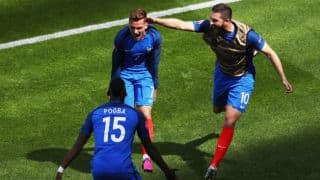