Croatia play their first fixture against Turkey on Sunday

Croatia forward Mario Mandzukic on Wednesday stressed the importance of playing as one during Euro 2016 to go far in the football competition starting on Friday. The Juventus striker is aware that while Croatia have very good players, it may not be enough to move to the advanced stages of the Euro, after playing Turkey in their first game on Sunday in Group D, reports Efe.

“We have to be as one on the pitch. We are aware of our quality, but it won’t mean much if we don’t act as one on the field,” the former Wolfsburg, Bayern Munich and Atletico Madrid player said. Asked about the defeat Croatia suffered against Turkey in the quarter-finals of Euro 2008, he said it makes no sense to talk about the past because it is difficult to compare the two teams after eight years. 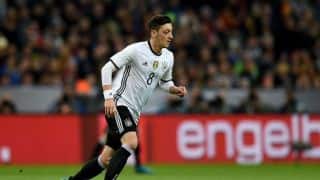 Euro 2016: Jerome Boateng to avoid taking his family to stadium's