Switzerland face France in the 26th match of Euro 2016 at Lille Métropole.

Switzerland  will take on France in Match 26th of Euro 2016. You can watch the SUI vs FRA live telecast on Sony ESPN, Sony ESPN HD, Sony Six and Sony Six HD. The live streaming of the match is also available on SonyLiv.com. The match will start at 00:30 AM Indian Standard Time (IST) on Monday, June, 19. The match will be played at the Stade Pierre Mauroy in Lille Métropole. France are currently leading Group A with 6 point to their name in 2 matches, while Switzerland are placed at No.2 in the table with 4 points. France has a clear chance of qualifying into the next stage with a win but will need to depend on other result if they loss. Switzerland on the other hand need to win this match if they want to stay in the contention for knock-out stage. Live Scorecard, Switzerland Vs France,  Group A, Match 26

Switzerland and new Arsenal signing Granit Xhaka go in hunt of a second victory in Euro 2016 on Wednesday against a Romania side fighting for survival. Romania came close to frustrating France in the tournament-opening match before Dimitri Payet’s sublime winner gave the French a last-gasp 2-1 win. The Swiss meanwhile had to fight before Fabien Schaer’s forceful header secured a 1-0 win over 10-man Albania. Schaer, the 1.86 metre (6ft 3in) Hoffenheim defender, makes a habit of scoring for the national side — his decisive goal on Saturday was his sixth in 21 appearances. 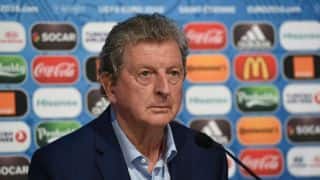