FIFA has no intentions of placing Russia under a watch regarding anti-doping issues during the 2018 World Cup.

Moscow: The International Association of Football Federations (FIFA) has no intentions of placing Russia under a watch regarding anti-doping issues during the 2018 World Cup as the programme is the same for all countries, its president Gianni Infantino has said. “We have a particular attention on everything, but not on a particular country, not in regard to Russia,” Infantino, who is currently paying an official visit to Russia, said on Wednesday. “FIFA has strong anti-doping programme since many years already and will continue to follow it up.”

“In addition to that we are, of course, always collaborating with different confederations and national associations while in charge of anti-doping control,” he added. “So we have our programme and it is very strict and is very firm and we are following it through. But whether the World Cup is taking place in Russia or anywhere else the anti-doping programme is always the same.”

The FIFA president arrived in Moscow on Wednesday to launch the 2018 World Cup and the 2017 Confederations Cup volunteer recruitment campaign jointly with Russian President Vladimir Putin. Infantino, elected the president of the world’s governing body of football three months ago, is paying his second official visit to Russia in his current capacity.

Russia is currently in full-swing preparations for the global football championship after the country won the bid to host the 2018 World Cup at the FIFA Congress in Guatemala on December 4, 2010. The country selected 11 host cities to be the venues for the matches of the 2018 World Cup and they are Moscow, St. Petersburg, Sochi, Kazan, Saransk, Kaliningrad, Volgograd, Rostov-on-Don, Nizhny Novgorod, Yekaterinburg and Samara. 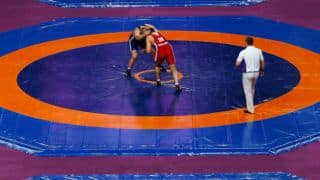