Chelsea’s interim head coach Guus Hiddink has revealed that he was Leicester City's first choice to take the job.

London: Chelsea’s interim head coach Guus Hiddink has revealed that he was Leicester City‘s first choice to take the job before the newly-crowned English football champions appointed Claudio Ranieri. The experienced Dutch coach rejected the Foxes, because he wanted to take a break from football after leaving his role as the Netherlands head coach in late June. “It is true that Leicester asked me (to be their coach) for this season. But I had decided this was a time for rest, and I wanted to do just nothing,” Hiddink was quoted as saying by Dutch newspaper De Telegraaf on Tuesday.

The 69-year-old eventually took up a temporary position at Chelsea for the second time following the sacking of Jose Mourinho in December. However, despite rejoining the club while at their lowest point, Hiddink claimed he has no reservations about taking up the role. “The club was in a negative flow and there was panic,” he said.  “It was my task to restore a calm atmosphere and that happened. If we kept losing, even to a club as Chelsea could have gotten in big problems. Just like nobody expected that Leicester became champions, that could have happened,” the 69-year-old said. 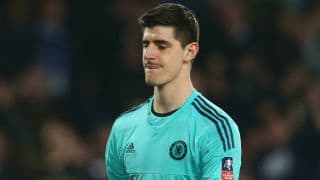