India have gained two places and are currently ranked 160th in the latest global football rankings released by FIFA on Thursday.

Mumbai: India have gained two places and are currently ranked 160th in the latest global football rankings released by FIFA on Thursday. India are currently with 142 points. India’s 1-0 World Cup qualifier win against Guam last year helped them move up six places to be ranked 166th in the world. Following that, they climbed three more spots to 163rd after winning the South Asian Football Federation (SAFF) Championship beating Afghanistan 2-1 in the final in February. Despite not featuring since, Stephen Constantine-coached India have managed to improve on their position by three places, climbing two spots over the past month.

Iran (44) is the highest ranked Asian nation while SAFF Cup runners-up Afghanistan have gained three places to be placed in the 151st position. On the other hand, World Champions Germany are in the fourth spot which is being led at the top by Belgium, followed by second placed and World Cup runners up Argentina while Spain hold the third place. Five-time champions Brazil are in the sixth spot. Portugal are in the seventh position followed by Columbia in eighth, England in ninth and Austria in tenth spot. 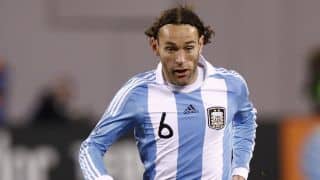