James Rodriguez has been found reaching speeds of more than 200 kmph as he made his way to the club's Valdebebas training facility.

Madrid: Real Madrid attacking midfielder James Rodriguez has been found reaching speeds of more than 200 kmph as he made his way to the club’s Valdebebas training facility with a police car in pursuit. On Friday, the two officers who were following the Colombian international footballer in an unmarked vehicle want to see him charged with a “serious infraction,” police sources told EFE. The incident began when former Monaco star Rodriguez, behind the wheel of an Audi R8, passed the two officers at high speed on the M-40 highway, the sources said.

The officers activated the vehicle’s police lights and siren and set off in pursuit of the Audi, which reached speeds of more than 200 kph. Rodriguez, 24, led the officers to Valdebebas, where the police flashed their badges at the gate to gain admittance and sought out the head of security at the facility. The officers eventually caught up with Rodriguez, who told them he was speeding to avoid being late for practice. He insisted he never noticed the police car chasing him and that he didn’t hear the siren because he had the car’s music system turned up loud.

Given Rodriguez’s status as a public figure, the officers saw no risk of flight and decided not to take him into custody, the police sources said. Another Real Madrid player, French forward Karim Benzema, recently had his driver’s license suspended after he was caught speeding. 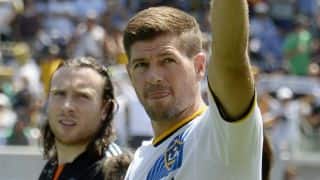