Chelsea captain John Terry believes he still has "two or three years" to perform "at the highest level".

London: Chelsea captain John Terry believes he still has “two or three years” to perform “at the highest level,” indicating that he does not know where he will be playing next football season if his club decided not to renew his contract. “In the last three or four years, I feel in the best physical condition that I have ever been in,” the 35-year-old veteran defender said. The contract of Terry, who debuted with the Blues in October 1998, will expire by the end of this season, while the English club has already informed him that his contract may not be renewed, reports Efe.

“For sure, I will continue playing. I’m hopeful of where that is but we are not sure yet,” Terry said, explaining that “playing in Europe is an option”. The defender noted that the matter will be “in Chelsea’s hands,” pointing out that he wants to stay with the Blues. Terry added that if Chelsea did not renew his contract, then he may play in Italy, MLS, China or Qatar. Terry retired from international football in 2012, having represented England in 78 matches. 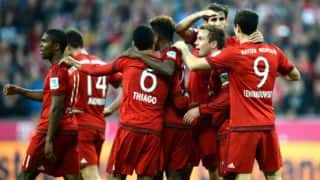 Thomas Muller: German Classico showed that Bayern Munich have to stay concentrated right up until the end