Madrid: FC Barcelona took an important step towards retaining their BBVA Primera Liga title when they defeated Atletico Madrid 2-1 in the Camp Nou Stadium. The Saturday’s win sees Barca open up a three point lead over Atletico with a game in hand and moves them seven clear of third placed Real Madrid, who play at home to Espanyol on Sunday, Xinhua reported. Goals from Leo Messi and Luis Suarez gave Barca the points in what was nevertheless an unconvincing display against a rival who ended up playing with nine men after Felipe Luis and Diego Godin were both sent off. Maybe the fact that both sides had played tough King’s Cup matches on Wednesday night took some of the spark from their play, although Atletico started the brighter of the two and took the lead after Koke was allowed time and space to finish after an excellent pass from Saul Niguez.

Perhaps Barca’s greatest strength is that they do not have to play well to score goals and proof of that came when they turned the result around in just 10 minutes. The first goal came from Leo Messi after 30 minutes when former Atletico Madrid winger Arda Turam found space down the left for the Argentinean to smash the ball past Jan Oblak in the Atletico goal. Ten minutes later Barca were ahead after Dani Alves’ ball over the top of the Atletico defence set Suarez through and the Uruguayan did the rest.

Things got even better for Barca when Felipe Luis was sent off with a straight red card just before the break for a high and dangerous challenge on Messi which saw him plant his studs in the striker’s knee. Atletico refused to accept defeat and started the second half strongly with only a fine save from Claudio Bravo denying Antoine Griezmann an equaliser, but their task became almost impossible when Godin saw his second yellow card for a wild lunge on Suarez with 25 minutes remaining.

Atletico still kept on fighting and Barca looked nervous for a few minutes before re-establishing control as their rivals simply ran out of gas. “Some people think that unless we win 4-0 it has been a poor performance,” commented Barca boss Luis Enrique after the final whistle. Elsewhere Athletic Club Bilbao won 1-0 away to Getafe thanks to Inaki Williams’ header, while Malaga won 2-1 away to Eibar. 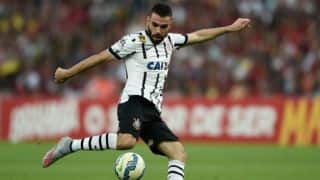 Bruno Henrique roped in by Wolfsburg