Lionel Messi-inspired Barcelona tightened their grip on the La Liga title race with a comprehensive 4-0 win at Eibar.

Madrid: A Lionel Messi-inspired Barcelona tightened their grip on the La Liga title race with a comprehensive 4-0 win at Eibar. Atletico Madrid stayed eight points back of Barca with 10 games remaining as Fernando Torres came off the bench to score in a 3-1 win at Gary Neville’s Valencia. Munir El Haddadi tapped home the opener from Luis Suarez’s cross before Messi doubled Barca’s advantage with a brilliant individual effort just before half-time yesterday. Messi doubled his tally from the penalty spot before Suarez lashed home the fourth six minutes from time.

Barca’s 11th consecutive league win also stretches their record unbeaten run to 36 games. Real Madrid remain 12 points adrift of Barca in third despite Cristiano Ronaldo’s four-goal show in a 7-1 demolition of Celta Vigo on Saturday. “It is evident we are well-positioned in the league, but there are plenty of points to play for and meetings with direct rivals to come,” said Barca boss Luis Enrique. “I am very happy to see the team evolve and improve without ever losing their ambition.”

El Haddadi made the most of his rare chance to start in the absence of the suspended Neymar with a simple finish at the back post eight minutes in after Messi’s brilliant pass had played in Suarez behind the Eibar defence. Eibar then enjoyed a concerted period of pressure and were desperately unlucky not to level when Borja Baston’s cross hit Sergio Busquets and flew inches past the far post. Yet, just when Eibar looked the most likely to score, Messi killed the game as a contest as he intercepted the ball in midfield and drove towards the Eibar goal before firing into the far corner for his 20th league goal of the season.

The second-half was far shorter on goalmouth action, but there was time for Messi to put Barca’s recent troubles from the penalty spot behind him when Ivan Ramis blocked the Argentine’s cross with his hand. Messi took responsibility after Suarez had missed from the spot against Rayo Vallecano in midweek and coolly dispatched the penalty for his 35th goal of the season.

And Suarez finally got the goal he craved to move back to within one of Ronaldo in the scoring charts with a brilliant nutmeg of Capa before smashing the ball into the far corner. That goal also took Suarez, Messi and Neymar’s combined tally for the season to 100. At Mestalla, Atletico rounded off a perfect week after wins over Real Madrid and Real Sociedad to pile more pressure on Neville, who was met with a banner reading “Gary go home” from the home fans.

“I’m probably the most disappointed I’ve been after a game,” said Neville. “We were in the game and in the last 20 it went away from us. I don’t like repeat mistakes — and it feels the same as last week. I felt we could have got something out of the game.”  Griezmann was Atletico’s hero with the only goal in the Madrid derby last weekend and the French international arrowed home his 22nd goal of the season from outside the box after 24 minutes.

Atletico were without inspirational central defender Diego Godin due to injury and the Uruguayan’s presence was missed as the visitors conceded for the first time in six games four minutes later. Paco Alcacer’s headed layoff was perfectly weighted for the run of Denis Cheryshev and the on-loan Real Madrid winger drilled home his third Valencia goal.

Valencia’s weakness at set-pieces has been a feature of Neville’s reign and they were undone once more 18 minutes from time as Torres stretched to turn home Jose Maria Gimenez’s flick-on at the back post.

“Barcelona are well ahead and we don’t want to look at them, but anything can happen in football,” Torres said of Atletico’s title chances. The hosts were then reduced to 10 men when Aderlan Santos saw a second yellow card for chopping down Torres. And Yannick Carrasco sealed all three points when his low effort embarrased Diego Alves. 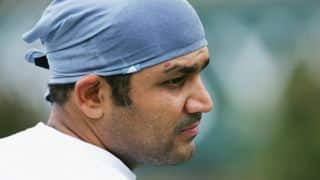