Real Madrid followed last weekend's football derby loss to Atletico with a workmanlike 3-1 away win against Levante, the worst team in La Liga.

Madrid: Real Madrid followed last weekend’s football derby loss to Atletico with a workmanlike 3-1 away win against Levante, the worst team in La Liga. Real, with one point from their last two matches, on Wednesday arrived in Valencia with holes in the lineup and their self-esteem at rock bottom, reports Efe. In the absence of the injured Sergio Ramos, Luka Modric, Gareth Bale and Karim Benzema, coach Zinedane Zidane gave Borja Mayoral his first start — playing alongside Cristiano Ronaldo — and benched Isco Alarcon, a main target of fans’ ire after Saturday’s 0-1 defeat to Atletico.

Real Madrid’s rough patch encouraged relegation-threatened Levante to fancy their chances against the powerhouse from the capital and visiting goalkeeper Keylor Navas had to be sharp. Ronaldo’s strike from the spot after Levante’s Lucas Orban brought down Lucas Vazquez in the area put the Blancos ahead 1-0. The advantage doubled when Mayoral’s shot hit the post before careening off goalkeeper Diego Marino into the Levante net.

The hosts responded with a goal from Deyverson, creating some nervous minutes for Real Madrid until substitute Isco made it 3-1 with an assist from Ronaldo. The win leaves the Los Blancos with 57 points from 27 matches, four behind second-placed Atletico and four points ahead of Villarreal, who picked up a point on Wednesday from their scoreless away draw with Celta Vigo.

Celta threw everything they had at a Villarreal side that hasn’t allowed a goal in six matches. While Villarreal retained their European Champions League berth, Celta fell to sixth place as Sevilla beat Eibar 1-0 to move up to No. 5 with 44 points, two more than the Vigo club. Seventh-placed Athletic Club Bilbao continued their winning ways, thumping Deportivo de la Coruña 4-1 on a hat-trick from Aritz Aduriz. Valencia, smarting from last weekend’s home loss to Athletic, found joy on the road Wednesday against Malaga, winning 2-1.

The 27th round wraps up Thursday with league leader Barcelona at Rayo Vallecano, Granada hosting Sporting and Betis visiting Espanyol. 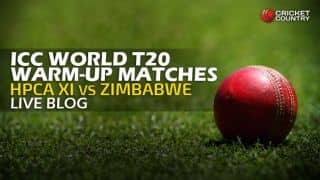