Messi blasted his penalty kick off target during the shoot-out and could not hold back his tears after the heart breaking loss.

Kolkata: Sports personalities took to Twitter on Monday to express their shock and surprise over Argentina talisman Lionel Messi quitting international football after their Copa America loss to Chile. Messi’s Argentina lost 2-4 on penalties against the defending champions at the MetLife stadium on Sunday. The 29-year-old forward blasted his penalty kick off target during the shoot-out and could not hold back his tears after the heart breaking loss. He later told reporters he was done playing for the country. “Messi: you are a champion. You can’t give up so easily. We can’t see you retire so early. Hope you would take time to rethink,” former India football captain Bhaichung Bhutia posted on the social networking site Twitter.

Indian cricketers Shikhar Dhawan and Suresh Raina too wrote about the Barcelona forward after his decision to quit the game.  “Congratulations!! You have been an inspiration to an entire generation #Messi,” Dhawan said. Raina wrote: “Sad day for football lovers We Will Miss You Messi #JersyNo10 #Messi #HeartOftheGame”. Indian football great P.K Banerjee told a channel,” It is a loss for world football. You could see he was in so much pain after the loss. May be it the reason why he decided to quit.” 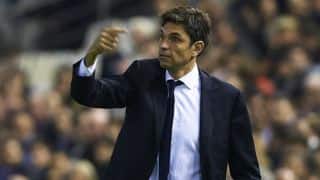