Nicknamed ‘The Engineer,’ 62-year-old Pellegrini was the head coach of Manchester City since 2013 leading the club to the EPL title in 2013/2014 season.

Moscow: Chilean football coach Manuel Pellegrini did not receive an offer from the Russian Football Union (RFU) to helm the national team, his agent Jesus Martinez has confirmed. A Spanish sports daily reported earlier in the week that Pellegrini had received an offer from the RFU to work as the head coach of the Russian team and the former Manchester City coach was considering the proposal, reports Tass. “The Russian Football Union did not make any offers to Pellegrini,” Martinez said in an interview with TASS on Friday. Nicknamed ‘The Engineer,’ 62-year-old Pellegrini was the head coach of Manchester City since 2013 leading the club to the English Premier League (EPL) title in the 2013/2014 season. The Chilean has been replaced at the end of the season by former Barcelona and Bayern Munich coach Pep Guardiola.

Martinez announced in mid-April that Pellegrini considered Russia’s Zenit St. Petersburg FC as one of Europe’s top ten clubs and would be interested to work as the club’s head coach. Last Monday the Russian national team lost to Wales 0-3 in its third group stage match of the 2016 UEFA Euro Cup and failed to qualify for the pre-quarterfinals.  Head coach Slutsky told a news conference after the match that someone else should take his place at the helm of the national squad.

Slutsky is also the head coach of the Russian CSKA Moscow football club, which he guided to the title in several seasons since taking charge of the club in October 2009. Last month he was named the country’s best coach after CSKA Moscow won the title in the last season’s Russian Football Premier League. On August 7, 2015, the RFU announced that Slutsky was appointed the head coach of the national team in place of previous Italian specialist Fabio Capello. The announcement followed Russia’s 0-1 defeat to Austria in the 2016 Euro Cup qualifier in Moscow in June 2015. The defeat put Russia’s chances of qualifying for the European football championship almost to zero.

Slutsky, however, managed to guide the national team to victories in all remaining qualifying matches of the 2016 UEFA Euro Cup starting with 1-0 victory over Sweden on September 5 and earned the spot for Russia in Europe’s main football tournament. The new coach’s inaugural match against the Swedish squad followed with a crushing 7-0 victory over Liechtenstein three days later and then he took the team to victories over Moldova (2-1) on October 9 and Montenegro (2-0) on October 12.

However, Russia emerged the winner only once in four friendly matches they played ahead of the major European football tournament, beating Lithuania by three goals to nothing. There was one draw against Serbia and two defeats to France (2-4) and the Czech Republic (1-2). Playing in Group B at the Euro Cup, which kicked off on June 10, Russia ended their match against England with 1-1 draw, then lost their encounters with Slovakia and Wales (1-2 and 0-3 respectively). Having finished in the last place of the group, the Russian players, led by Slutsky, returned to Moscow on Tuesday. Possible names BCCI can be replaced with 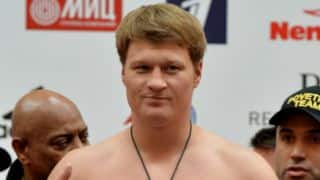