Paraguay were held to a goalless draw by Costa Rica in sultry conditions at the Citrus Bowl on Saturday.

Orlando: Two-times South American champions Paraguay were held to a goalless draw by Costa Rica in sultry conditions at the Citrus Bowl on Saturday in Copa America Centenario Group A. Costa Rica ended the game with 10 men after defender Kendall Waston was sent off in injury time for a wild challenge on Nelson Valdez. The result leaves Colombia who beat the United States in Friday’s opener, alone at the top of the group with three points. Waston will be suspended for Costa Rica’s game on Tuesday in Chicago against the United States. The intense heat and humidity, with the temperature at kick-off around 92 degrees fahrenheit (33 degrees celsius) was blamed by both teams for what was, in the end, a disappointing spectacle in front of a disappointingly small crowd of 14,334.

Paraguay coach Ramon Diaz said it was “crazy” to have scheduled the match to be played at 5pm local (Eastern) time. “The needs of players need to be taken into account they are the ones who put on the spectacle,” he told reporters. Costa Rica forward Bryan Ruiz agreed saying: “The heat definitely effected the game, it could have been a much better game in different conditions.” Given those conditions, both sides were wary over over-exerting themselves but it was Paraguay who got an early grip on possession

Striker Jorge Benitez, who plays his club football in Mexico for Cruz Azul, showed some excellent footwork to create space inside the box in the ninth and his low cross was almost turned into his own net by Costa Rica defender Celso Borges. Paraguay went close again when Paulo Da Silva flashed a header wide after a well-timed run to meet a corner from Oscar Romero. Romero, an old-fashioned style winger, entertained the crowd with some delightful touches, clever dribbling and intelligent passing, but Paraguay were unable to turn their possession and creativity into real chances.

Costa Rica, quarter-finalists in the World Cup two years ago, played a more direct style, looking to find forwards Joel Campbell and Ruiz quickly, but they were unable to find much in the way of fluidity to their play. Ruiz was a threat with a flashing header but it went straight into the arms of Paraguay’s veteran goalkeeper Justo Villar. At the other end, Benitez won possession inside the Costa Rica half and showed great pace as he burst goalwards, but his right foot shot flashed wide of the post.

After the break, the two sides struggled to pick up their rhythm again and it was not until the 71st minute that there was a real threat on goal when Paraguay defender Gustavo Gomez had a header from a Derlis Gonzalez corner well saved by Costa Rica keeper Patrick Pemberton. With three minutes left, Costa Rica substitute Christian Bolanos caused Villar problems with a low shot from over 25 years out which bounced awkwardly in front of the 38-year-old keeper who pushed it wide.

“We struggled in the first 20 minutes when they really controlled the game,” said Costa Rica coach Oscar Ramirez. “But I thought that after the break we were able to dominate them in the way they had dominated us and in the end we had the chances to win the game. It feels like two points lost rather than a point gained,” he said. Argentine Diaz disagreed: “If I analyse the whole game, I think we were the ones who could have won it. I was pleased with the way the boys played.” 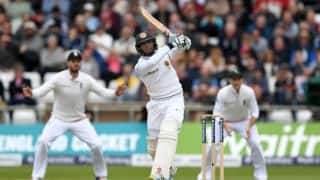