The three-day sale of more than 2,000 items from world football icon Pele's personal memorabilia kicked off on Tuesday.

London: The three-day sale of more than 2,000 items from world football icon Pele’s personal memorabilia kicked off on Tuesday, with shirts, souvenirs and medals all going under the hammer. The Brazil legend’s collection of items from his extraordinary career, being sold in London by Los Angeles-based Julien’s Auctions, is expected to fetch some 3 million ( 4.4 million, 3.8 million euros). The 75-year-old is the only player to have won the World Cup three times and the standout item is a replica awarded to him of the Jules Rimet winners’ trophy, which is estimated to fetch up to 410,000. His World Cup winners’ medals from 1958, 1962 and 1970 are expected to net up to 140,000 each.

One of the highlights coming up is the ball with which Pele scored the 1,000th goal of his career, which auctioneers say could sell for up to 42,000. A host of more offbeat items are also up for grabs, including the boots the star wore in the 1981 film “Escape To Victory”, his old passports and a lurid sombrero hat. Those with less deep pockets can even snap up his credential for entry to the 2012 London Olympics for up to 490, or a ceramic beer mug bearing his name for up to 560.

A portion of the proceeds from the sale will go to help Pequeno Principe, the largest children’s hospital in Brazil, which Pele said was close to his heart. Born Edson Arantes do Nascimento, Pele is held by many as being the greatest footballer in history. He scored 1,281 goals in 1,363 matches, appeared 91 times for Brazil between 1957 and 1971 and played his club football for Brazil’s FC Santos as well as the New York Cosmos. 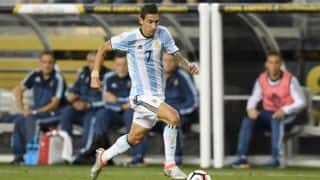