Bayern Munich goalkeeper Oliver Kahn believes German football club’s outgoing head coach Pep Guardiola has been too cautious over his team’s ambitions to and should be more outspoken.

Munich: Legendary Bayern Munich goalkeeper Oliver Kahn believes the German football club’s outgoing head coach Pep Guardiola has been too cautious over his team’s ambitions to win trophies and should be more outspoken about the team’s objectives. Guardiola has guided Bayern to back-to-back Bundesliga titles since his arrival ahead of the 2013-14 campaign and is close to making it three in a row. They are still in the hunt to win the Champions League and te German Cup, too, and Kahn would like to see Guardiola admit Bayern want to win the three trophies.

“Pep always tries to avoid giving a straight answer when he is asked about winning titles and if he wants to win the Champions League,” Kahn was quoted as saying by Eurosport on Monday. “You’ve got to wonder why he is so cautious. He is always a bit anxious and I think that is part of his personality.I think that is the reason why he is always talking about how Bayern played and how his players behaved rather than talk about titles. It is always about how they got there,” the former German goalie said.

Bayern are one win away from the Bundesliga title, with Ingolstadt and Hannover awaiting in their final two league fixtures. They must overturn a 0-1 first-leg deficit against Atletico Madrid if they are to reach the Champions League final, while they will face Borussia Dortmund in the GHerman Cup showpiece match. 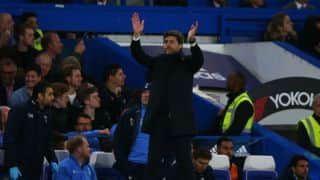