Sergi Guardiola was sacked after the team management came across some offensive anti-Barcelona tweets he had posted two years back.

Barcelona: Within hours of signing for Barcelona B team, footballer Sergi Guardiola was sacked after the team management came across some offensive anti-Barcelona tweets he had posted two years back. Guardiola was given a contract on Monday afternoon but then by evening Barcelona officials cancelled it. “FC Barcelona has decided to terminate the contract signed with Sergi Guardiola, after finding that he had published offensive tweets about the club and Catalonia,” Barcelona said in a statement. Guardiola had posted on Twitter calling the Catalans, ‘a bit**’ and wrote in support of arch-rivals Real Madrid, “Hala Madrid”.

“Hala madrid puta cataluna,” his tweet read. The 24-year-old later apologised for the tweets but added they were posted by a friend. “I know I made a mistake. I apologise to Catalonia and Barcelona. I understand the decision, I’d do the same,” Guardiola was quoted as saying by the Daily Mail. “I want to make clear I didn’t write those tweets. A friend took my phone and did it. It’s a misunderstanding. The tweets are from 2013, a joke from a friend, I didn’t even know the tweets existed. Barcelona have treated me very well. I understand their decision. Now I’m going home, we’ll see what happens.”

“Once you’re a professional, you support the team that plays best, and that’s Barcelona. Joining them was a dream, now it’s broken. I’m from Mallorca. I’m not anti-Catalan or anti-anything. I couldn’t write those tweets,” he added. They have also reinforced their squad for the second half of the season with the arrival of two new players. “The duo of Xemi and Moises Delgado completed their medical examinations on Monday and will train with the rest of the group from Tuesday,” the club said in its website. Midfielder Josep Miquel Fernández, better known as ‘Xemi’, arrives from UE Cornellà where he scored five times last season in Segunda B. Left-back Delgado arrives from Sevilla Atletico, where he has played 17 games this season. 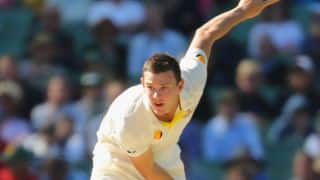