Sevilla beat Liverpool 3-1 in the UEFA Europa League Final; They will be up against Barcelona in the Copa Del Rey Final on May 23.

An audiovisual show for Sevilla football club members at the Ramon Sanchez Pizjuan stadium here next Monday will be the culmination of the Spanish team’s celebrations of its fifth Europa League title, which they clinched after Wednesday’s final against Liverpool. The celebrations for the European title will start with a cavalcade with the trophy carried on a bus through the streets of Seville, reports Efe.  The parade will reach its destination at the Ramon Sanchez Pizjuan, where an audiovisual show will be held for Sevilla club members. Sevilla will now face FC Barcelona in the Copa Del Rey final which will take place on May 23. 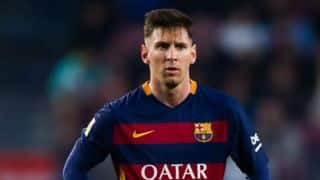