Pirl was deemed unfit to make the current European squad which was announced by Italy's head coach Antonio Conte.

Veteran Italian playmaker Andrea Pirlo is not disappointed after being excluded from Italy’s squad for the Euro football championship starting in France from June 10. The 2006 World Cup winner has enjoyed a status as an unquestioned starter for the Azzurri for a decade, but at 37, he was deemed unfit to make the current European squad which was announced by head coach Antonio Conte last week. One of the best midfielders of the game and known for his vision and long passing, Pirlo has represented Italy in 116 games. “I spoke with the coach and I already knew what I had to do, and what he had to do too. There is no disappointment,” Pirlo was quoted as saying by Sky Sports on Sunday. ”

“I was always in touch with him during this season. These are decisions that are taken on both sides. He’s the Coach, and it’s only right that he should decide what’s best for him.”

The Milan and Juventus legend last year decided to join Major League Soccer (MLS) outfit New York City FC. The United States league is not considered to be competitive enough to get him a place in the national set-up. However, Pirlo is hoping that Italy, despite not being a favourite, will bag their second Euro title.

“I hope that Italy win the Euros, although other teams have better odds, like Germany, Spain and France, he said. “It’s going to be a good tournament, let’s hope my team-mates can take the trophy home.” 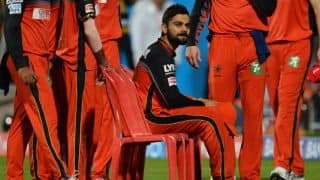