Euro 2016 hosts France have suffered another blow with FC Barcelona centre back Jeremy Mathieu ruled out with a calf injury.

Paris: Euro 2016 hosts France have suffered another blow with FC Barcelona centre back Jeremy Mathieu ruled out with a calf injury. The 32-year-old former Sochaux, Toulouse and Valencia defender, who capped five times for his country, picked up the injury in Barcelona’s Copa del Rey final victory over Sevilla last Sunday, reports Xinhua. France coach Didier Deschamps initially said Mathieu would only miss the first of France’s two friendlies before Euro 2016 kicked off on June 10, but later changed his mind with further scans. Lyon’ s 22-year-old Samuel Umititi has been promoted from the stand-by list to fill in Mathieu’ s place.

The Cameroon-born stopper helped Lyon to a second-place finish in Ligue 1 this season, scoring one goal in 30 appearances. Chelsea’s Kurt Zouma is another defensive option who is unavailable due to a long-term injury. Earlier this week, Real Madrid star Raphael Varane was announced unavailable for the tournament due to a thigh injury and Valencia full-back Adil Rami was called up to fill in his shoes.

The French squad, which will be cut from 31 to 23 players by Sunday, take on Cameroon in a friendly in Nantes on Monday. Deschamps’ side start their Euro 2016 campaign against Romania in the tournament opener, before facing Albania and Switzerland in Group A. 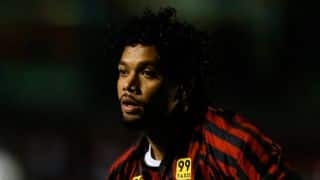 Otavio not concerned about moving to Inter Milan