UEFA Euro 2016 will be Northern Ireland's debut appearance in a continental tournament.

Although Ireland had a single side from 1882 to 1921, organised by the Irish Football Association (IFA), in 1921, the jurisdiction of the IFA was reduced to Northern Ireland following the secession of clubs in the soon-to-be Irish Free State, although its team remained the national team for all of Ireland until 1950, and used the name Ireland until the 1970s. However, The Football Association of Ireland (FAI) organises the separate Republic of Ireland national football team. Although a part of the United Kingdom, Northern Ireland too has always had a representative side in the major football tournaments – whether alongside the rest of Ireland pre-1922 or as its own entity, according to Wikipedia. However, the same is not applicable in the Olympic Games, as the IOC has always recognised United Kingdom representative sides.

Northern Ireland has competed in three FIFA World Cups till date, and has managed to reach the quarter-finals of the 1958, and 1982 edition. Nevertheless, UEFA Euro 2016 will be their debut appearance in a continental tournament. In 1884, they competed in the British Home Championship, having lost all the three games. In 1887, they won their first game against Wales by 4-1. However, their tough phase continued as they suffered mostly losses in the phase. Following their partition in 1920, they never got to play in any of the major tournaments, as FIFA did not recognise two football governing bodies, before FIFA agreed to have two different teams in the side.

Roy Carroll (GK): He plays for NIFL Premiership side Linfield. He has played for big clubs like Wigan Athletic, Manchester United (where he won a Premier League and also the 2004 FA Cup) and Olympiacos (where he won the Greek Superleague and the 2012 Greek Cup). He has also represented Northern Ireland for over 35 times at the international level, gaining his first cap in 1997. Carroll made his international debut in May 1997 against Thailand. In May 2013, Carroll was named the Northern Ireland International Personality of the Year.

Aaron Hughes (DEF): One of the most experienced players in the side. Hughes is just a game short of his 100 international appearances. He last played for Australian club Melbourne City and the Northern Ireland national team as a defender. Although a centre back, he is also comfortable at right back or left back, as well as anywhere in the midfield. He is mostly renowned for his disciplined defending, having made 455 Premier League appearances without getting sent off. He made his debut for Northern Ireland against Slovakia in March 1998. He announced his retirement from international football in 2011, before making a comeback the year next.

Steven Davis (MID): Another most experienced player in the side, as well as the skipper, as he plays as a midfielder for Premier League club Southampton. Davis made his international debut in 2005 and has played over 80 international games, scoring eight goals. Davis’ first goal came against Wales in a 3–2 home defeat in another qualifier on October 8 in 2006. He was also named Northern Ireland’s youngest modern day. On October 8, 2015, Davis scored twice in a 3–1 victory over Greece as it allowed Northern Ireland to qualify for Euro 2016, their maiden European Championship.

Kyle Lafferty (FW): Having played 50 games for Ireland, Kyle Lafferty is a striker, who plays for Norwich City. He made his debut international appearance for Northern Ireland in 2006. With 16 goals, he is also the team’s second highest scorer of all time, behind former strike partner David Healy on 36. Although he was impressive in his debut game, his team lost it. His first win came against Liechtenstein in 2008. He also scored in all of Northern Ireland’s first three matches in UEFA Euro 2016 qualifying, against Hungary, the Faroe Islands and Greece. 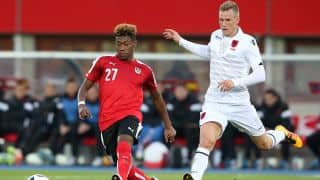