Dhanraj Pillay: India have given very tough fight to Australia

Dhanraj Pillay: India have given very tough fight to Australia

Dhanraj Pillay said on Tuesday that Indian players should not end up regretting like he does even now after missing chance of clinching a medal at Olympics.

Mumbai: Congratulating the Indian hockey team for its fine display in recent times, former captain Dhanraj Pillay said on Tuesday that they should not end up regretting like he does even now after missing the chance of clinching a medal at the Olympics after four attempts. “I congratulate the Indian team. They created history as it was the first time that we played in the final of the Champions Trophy against Australia [in London],” Dhanraj told reporters on Tuesday when asked about the team’s performance and its chances at the upcoming Rio Olympic Games.

“Winning and losing are part of the game, but they have given a very tough fight [to Australia]. When I was playing, I don’t think we played as consistently as they did for 70 minutes [against Australia] although we had beaten them in their own country,” said the four-time Olympian. India lost 1-3 to Australia via the penalty shoot out in the summit contest, after tying goalless in regular time, to end up with their first silver medal in the annually held tournament that began 36 years ago.

Asked where he felt the team needs to improve to climb the podium at the August 5-21 Olympics, Dhanraj said the players need to be extra sharp in front of goalmouth. “It’s in field goal scoring. You need to be very sharp at the goalmouth. Whatever opportunity you get, you need to convert it 100 percent. Don’t take a chance and don’t regret later as how Dhanraj Pillay is regretting. After playing in four Olympics, I still regret I could not win even one medal for my nation.”

The four-time World Cupper who also who represented the country in four Asian Games, complimented the team for the fitness level it has shown and also gave credit to the team’s Dutch coach Roelant Oltmans. “With their performance over the last six months at the Sultan Azlan Shah tournament [in Malaysia where they reached the final and then lost to Australia] and in the Champions Trophy they have shown they are on the right track for Rio,” said the 47-year-old one-time mercurial forward.

“They did not have some senior players like (goalkeeper) Srejesh in Azlan too and some seniors were not here [in Champions Trophy] Sardar Singh and Rupinder Pal Singh. I think the coach is going in the right direction and experimenting to see where we are lacking. Sardar’s return will now strengthen the team,” said Dhanraj. Dhanraj was very impressed with the fitness level of the team and its ability to not only keep pace with the speedy set of Australians but even outshine them.

“110 per cent I can say our fitness level has improved. Frankly, Indians could never keep pace with Australia. But in this tournament, I could see Australia were nowhere compared with India in terms of fitness or ball possession. We had 79 per cent possession in the last quarter. We also dominated all the quarters and overall I also could not give the sort of performance these boys have given in recent times.”

Dhanraj advised the players to be very careful in their intake of medicines as the wrong ones could land them in trouble in Rio. “Only one month is left and my request to the players is – don’t fool around with your body, don’t take any unnecessary risk because if you take 2-3 days’ rest it will take four days for you to recover, concentrate on fitness, eat the right food at the right time and don’t take any medicine which is going to harm you in the Olympics.”

He said anyone from the team could be asked to give urine samples for dope testing. “Nobody knows who will be called for dope test in the Olympics. I have given samples in all the Olympics, World Cups, Asian Games. They had called me for dope test. So my advise to the players is – be careful.” He also felt the Indian team should take it one game at a time and target the weaker teams in the group.

“It’s [introduction of quarter finals stage instead of direct semis after group stage] is going to benefit all teams and especially India. We can concentrate on 2-3 teams which are weaker than us. We should concentrate on those 2-3 teams as Germany and Australia are also there [in India’s pool]. We should make a strategy in such a way that we should not lose also and also keep points. Oltmans is good in making strategy and my advice is – take it one match at a time.” 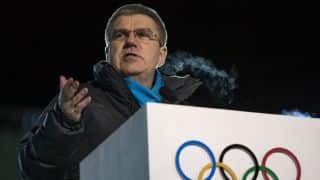