The Indian women's hockey team lost 0-2 in their opening encounter of the five-match Test series against Great Britain on Tuesday night.

Marlow: The Indian women’s hockey team lost 0-2 in their opening encounter of the five-match Test series against Great Britain on Tuesday night. The Indians started on a rapid pace, winning a penalty corner at the 7th minute, but the opportunity went begging as Anuradha mishit a rebound. They kept pressing through the first quarter as Vandana’s deflection went into the goal but the referee denied and gave it as dangerous play. The second quarter too saw the Indian girls pressing hard as Ritu almost got India the lead but her shot was saved by the goalkeeper from Great Britain. The hosts also had a very good opportunity in the second quarter as they won a penalty corner but couldn’t convert the chance. At half time the match was poised at 0-0.

The hosts dominated the third quarter as Ellie Rayar managed to fence the ball eight minutes into the quarter to take the lead. The fourth quarter saw the Indian girls trying to make an impact on the match, but that wasn’t to be as Ellie once again found the fence with a penalty coner with just three minutes into the match to seal the deal in favour of the hosts. The Ritu Rani-led side will aim for a strong comeback when they face the hosts in the second match of the Test series on Thursday. 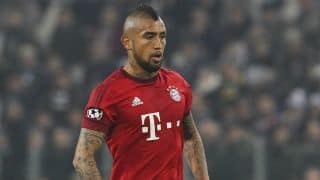 Arturo Vidal: Bayern Munich were better in both games against Atletico Madrid