Mominul Haque swung Bangladesh into gear Thursday with a solid half-century on the opening day of the first Test against the West Indies in Chittagong. Mominul hit an unbeaten 55 as the home side reached 105-2 at lunch after skipper Shakib Al Hasan won the toss and elected to bat first at the Zahur Ahmed Chowdhury Stadium.

Pace bowler Kemar Roach struck in the first over of the morning, dismissing opening batsman Soumya Sarkar on a duck as the two-Test series got under way. But Imrul and Mominul steadied the innings with their 104-run stand for the second wicket. Left-arm spinner Jomel Warrican broke the stand on the stroke of lunch when he had Imrul caught by Sunil Ambris at forward short-leg for 44.

Warrican was unlucky not to get Imrul early when the left-hander was reprieved by a no-ball on 16. Imrul picked out deep square leg fielder Shannon Gabriel in the bowler’s very first over, but a television replay indicted that Warrican had overstepped. He was also put down by Roston Chase at second slip off Roach on three.

Mominul, now eyeing a third consecutive hundred at Chittagong, looked solid at the other end, hitting seven fours including three in one over off Chase. It is his 13th Test fifty. Bangladesh received a boost before the match when Shakib overcame fitness concerns to play his first game in any format since September.

The home side handed a debut to teenage offspinner Nayeem Hasan, adding him to a strong spin attack, which also includes Shakib, Taijul Islam and Mehidy Hasan. 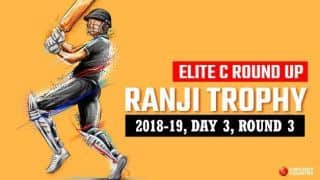 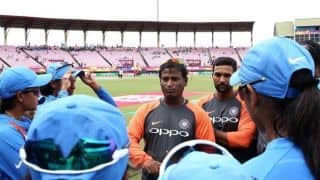