Brendan Taylor struck a fluent 75 off 73 balls as Zimbabwe posted 246 for 7 against Bangladesh in the second ODI at Chittagong on Wednesday.

Brendan Taylor struck a fluent 75 off 73 balls as Zimbabwe posted 246 for 7 against Bangladesh in the second ODI at Chittagong on Wednesday. Taylor was assisted by a crucial knock from Sikandar Raza, who scored 49 off 61 down the order but Mohammad Saifuddin s three for 45 kept Zimbabwe under 250 to defend and win their first match against Bangladesh after 11 straight losses.

After skipper Mashrafe Mortaza went for runs in his opening two-over spell, Saifuddin picked the first wicket of Hamilton Masakadza, after experienced campaigner Taylor, in the company of Cephas Zhuwao, added 52 runs for the second wicket in good speed. At almost seven an over, Zimbabwe reached 70 before Mehidy Hasan sent Zhuwao. Taylor was then joined by Sean Williams, who continued his impressive run with a 76-ball 47.

Although his innings wasn t too sparkling he hit only two boundaries but he played second fiddle for Taylor, who struck his 35 ODI fifty. Taylor and Williams built on the platform set by him and Zhuwao with a 77-run stand between them for the third wicket. The dismissal of Taylor, and then Williams dented Zimbabwe s progress and allowed Bangladesh an opportunity to sneak through.

Taylor, who got a reprieve when his LBW dismissal was reversed courtesy a review, eventually departed after scoring nine fours and a six, after which Raza scored quickly at a strike-rate of over 80. A significant contribution from Peter Moore (17 off 20 balls), who put 41 runs with Raza, got Zimbabwe within striking distance of 250. 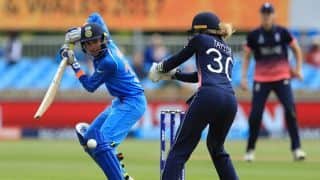