Mohammad Mithun posted his second successive half-century against New Zealand as Bangladesh recovered from an early collapse to set a 227-run target.

Mohammad Mithun posted his second successive half-century against New Zealand as Bangladesh recovered from an early collapse to set a 227-run target in the second one-day international in Christchurch on Saturday.

Mithun scored 57 off 69 deliveries, with Bangladesh all out in the final over.

The tourists need to win to keep the three-match series alive after losing the first ODI by eight wickets when Mithun was again their top-scorer with 62.

Bangladesh were in trouble at five for 93 after 21 overs before Mithun and Sabbir Rahman put on 75 for the sixth wicket.

New Zealand assisted the Bangladesh revival with 23 extras and some sloppy fielding while Rahman had fortune on his side when an edge off a Todd Astle delivery nicked the stumps but the bails stayed on.

With the heavy overcast conditions, Bangladesh needed a conservative approach at the top of their innings.

But while they batted cautiously wickets fell at regular intervals.

Trent Boult removed Liton Das (one) in the fourth over and when play resumed after a brief rain disruption Matt Henry claimed the wicket of Tamim Iqbal (five).

After 10 overs Bangladesh were 32 for two.

The total nearly tripled over the next 10 overs but three wickets fell.

Ferguson had to wait until the last ball of his third over to claim a wicket when he bowled Rahim for 24.

Todd Astle had success in his first over with Mohammad Mahmudullah caught behind for seven and later bowled Mithun.

Ferguson was the most successful New Zealand bowler with three for 43. 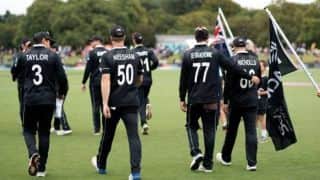