Malinga finished with 5 for 44 and affected the dismissal of skipper Eoin Morgan, England s top scorer, before triggering a lower order collapse.

Lasith Malinga continued his fine comeback to international cricket, picking up his eighth ODI five-wicket haul for Sri Lanka, against England in the second match at Dambulla on Saturday. Malinga finished with 5 for 44 and affected the dismissal of skipper Eoin Morgan, England s top scorer, before triggering a lower order collapse. England however, from 254 for nine, finished on 278/9 with the last-wicket pair of Adil Rashid and Olly Stone adding an unbeaten 24.

Malinga, who returned to ODIs with 4/23 against Bangladesh during the Asia Cup, took four balls to help Sri Lanka draw first blood as he removed opener Jason Roy for a duck. Root and Jonny Bairstow scored at a healthy rate to put on 72 runs for the second wicket before the wicketkeeper batsman was cleaned up by Thisara Perera. From there, it was up to Root and Morgan, the pillars of England batting to take over. The two put on 68 runs before Dhananjaya de Silva to end Root s innings for 71 having struck six boundaries.

But the highlight of the innings belonged to Morgan. He got off the mark with a six off Perera and took advantage of anything loose on offer. With a nudge to long-on, the England captain brought up his half-century. His innings wasn t a flawless one, but just about effective enough to keep England going. He was on the verge of setting things nicely for England before Malinga unlocked his magic. A slower yorker and Morgan hit it straight back to the bowler. That, as is turned out was the beginning of the slide.

A series of yorker masterclass saw Malinga reduce England from 218 for 4 to 254 for nine, with Moeen Ali, Chris Woakes and Liam Dawson falling cheaply. Moeen was yorked first ball with the ball crashing onto the stumps. Woakes survived for 10 balls before he was trapped Leg before wicket. Dawson struck a boundary but that remained his only scoring shot before Malinga produced another yorker to pick up his fifth.

With a little more than three overs left, England were in danger of getting bowled out before Adil Rashid and Olly Stone saw off the remaining deliveries. The legspinner took Perera for boundaries off the last two balls to ensure England ended on a competitive score. 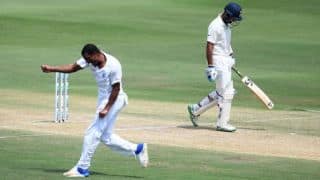 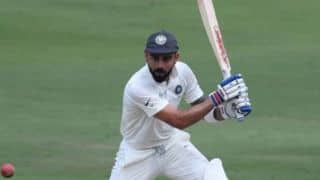