Australia will need to defend a total of 231 to avoid an eighth straight loss after South Africa dismissed them inside 50 overs.

Australia will need to defend a total of 231 to avoid an eighth straight loss after South Africa dismissed them inside 50 overs with pacer Kagiso Rabada finishing with 4 for 54. Rabada and Dwaine Pretorius (3 for 32) ran through Australia’s middle order and had them eight down for 187. With another low total beckoning, Adam Zampa and Josh Hazlewood frustrated South Africa as Australis’s last two wickets added crucial 44 runs.

Opting to field after winning the toss, Lungi Ngidi drew first blood by removing Travis Head early. Head was out LBW before captain Aaron Finch and Shaun Marsh made steady progress. Finch and Marsh’s second-wicket stand accounted for 54 runs before Rabada had the left-hander out caught behind.

Aaron Finch’s dismissal – playing on to Dwaine Pretorius – triggered a slide for Australia. Chris Lynn scored a run-a-ball 44 with three boundaries and two sixes and vice-captain Alex Carrey made 47 off 72. Lynn got off to a start and having taken Rabada for 6, 4, 4 and 4 in one over, edged the next ball to de Kock, who took four catches behind the stumps. Maxwell endured another failure and scored just 15.

Pretorius did the damage in the middle order to remove Maxwell and allrounder Marcus Stoinis. Dale Steyn then returned to get rid of Pat Cummins and Mitchell Starc for single-digit scored to leave Australia in danger of getting bowled out inside 200. But Zampa and Hazlewood resisted to play out the next eight and a half overs. The legspinner scored 22 off 24 with two boundaries before he was the last man dismissed. 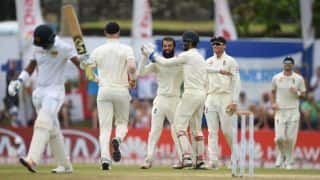 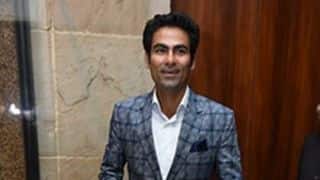