Miller and du Plessis were involved in a record fourth-wicket partnership of 252 runs for South Africa.

Centuries to captain Faf du Plessis and David Miller allowed South Africa to set Australia a daunting target of 321 to win the series decider in Hobart on Sunday. Joining hands at 55 for 3, Miller and du Plessis were involved in a record fourth-wicket partnership of 252 runs for South Africa before both batsmen cut loose in the final passage of play, with 130 runs coming in the final 10 overs.

Their record stand is also the highest in Australia-South Africa matches, surpassing the 222-run partnership between Steve Waugh and Michael Bevan way back in the year 2000. Australia went on to win that game in Melbourne, and today, South Africa stand a wonderful chance to secure their first series win in Australia in nine years having piled their highest total on Australia soil of 320 for 5.

What began as a cautious approach turned a bullish exhibition in the last five overs, which fetched 75 runs – 51 of which came off the final 15 deliveries. Du Plessis and Miller went bananas, with boundaries and sixes being scored at will, and along the way, deflating all the fine effort Australia’s bowling effort had put together 48 hours ago in Adelaide. Du Plessis and Miller fell in the penultimate and the final over having hit 28 boundaries and six sixes between them, but by then the damage was done.

Australia opted to bowl and the move seemed to pay off well as Mitchell Starc took care of Quinton de Kock third over of the match. The early movement troubled the batsman just about enough for him to offer a feather to Alex Carey behind the stumps. 4 for 1 soon became 26 for 2 with Reeza Hendricks – he took 18 balls to get off the mark – falling to Marcus Stoinis’ first over – the allrounder eventually conceded 70 off 10 overs. Aiden Markram, who started off the same way as in Adelaide, seeing off a testing spell against Starc, Josh Hazlewood and Pat Cummins, but having scored 32 including three sixes and a four, he too nicked for Carey to successfully complete his third catch.

With South Africa in need of a partnership, Miller and du Plessis took centerstage and put on a batting display that was last seen by South Africa a long time ago. There were a couple of close shouts – du Plessis’ thin edge was dropped by Carey and Miller was given out LBW, but a last-minute review showed the ball going on top of the stumps. The economic figures were dented in the last five overs. Du Plessis and Miller reached their centuries in subsequent overs before fours were dealt at will. It took a slower bouncer by Stoinis to get rid of du Plessis, while Miller, going for a heave, holed out in the deep to Finch. 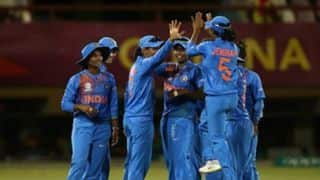 India vs Paksitan, ICC Women’s World T20, Live Streaming: When and where to watch and follow live