Pakistan declared their second innings at 181/6, setting Australia a target of 462 runs to win the first Test at the Dubai International stadium.

Pakistan declared their second innings at 181/6, setting Australia a target of 462 runs to win the first Test at the Dubai International stadium.

After being bundled out of 202 in their first dig, Australia have a daunting task ahead to negotiate over five sessions of play remaining in the Test. Australia will take heart from the fact that openers had provided them will a good start, which was squandered by the middle-order in the first innings and if the openers – Usman Khawaja and Aaron Finch – can get them off to a good start once again, the middle-order will hope to rectify their mistakes in the second innings.

Resuming on 155 for 5 post lunch, Pakistan were looking for quick runs and managed to 25 runs in 7.5 overs before Asad Shafiq came down the track in a bid to hoist Nathan Lon over the cow corner. However, he was caught by Mitchell Marsh for 41, and Pakistan skipper Sarfraz Ahmed declared the innings, with having taken a lead of 461 runs.

Earlier, in the first session, Pakistan made 110 runs in 33.4 overs at the expense of two wickets with Imam ul Haq scoring 48, while Haris Sohail made 39. Jon Holland finished with 3 for 83 in his 30 overs in the second innings, while Nathan Lyon claimed 2 for 58 in his 25/5 overs. 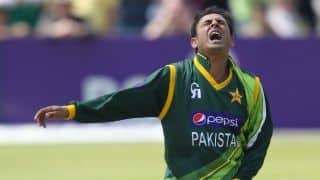