Travis Head and Marnus Labuschange put on 166 for the fifth wicket.

Five wickets to Suranga Lakmal – the second time in three Tests away from home that he’s managed this – helped Sri Lanka limit Australia‘s lead to 179 on day two of the day-night Test in Brisbane.

Lakmal was a constant threat to Australia’s batsmen, taking four wickets on Friday to end with 5/75 from 27 overs in a very fine bowling effort that kept Sri Lanka in the game.

From an overnight 72/2 in reply to Sri Lanka’s 144, Australia finished on 323 with new vice-captain Travis Head top-scoring with 82 and Marnus Labuschagne making 81, his first Test fifty. The debutant Kurtis Patterson appeared assured in his first innings and with the tail helped get the total past 300 until he became Lakmal’s fifth wicket in a new spell.

Earlier, Marcus Harris was out in the first over of the day when he tamely cut Lahiru Kumara to point for 44, and three overs later the nightwatchman Nathan Lyon was out for 1 to a terrific catch at second slip by Kusal Mendis off Lakmal, leaving the hosts at 82/4. (LIVE SCORECARD: AUSTRALIA vs SRI LANKA, 1st TEST)

Head, already a senior in this inexperienced line-up, drove and cut with precision to reach a career-best 84 peppered with ten fours. Lakmal claimed him lbw in a new spell, the batsman reviewing in vain, and next ball found the edge off Tim Paine’s bat for Mendis to clutch a stunner at second slip. There was to be no hat-trick for Lakmal, but a fifth was not too far off when he came back and won an lbw shout against Patterson, who made 30 from 82 balls. 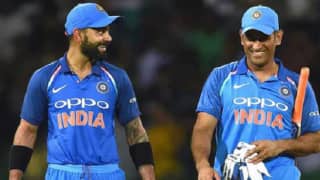