David Warner peeled off yet another century to set base for Australia's mammoth 381/5 against Bangladesh.

David Warner peeled off yet another century to set base for Australia‘s mammoth 381/5 against Bangladesh in their sixth match of the ICC Cricket World Cup 2019 at Trent Bridge on Thursday.

Warner smashed 166 off 147 with 14 fours and five sixes for his second century of the tournament, overall 16th and was involved in a big 192-run stand for the second wicket with Usman Khawaja.

Khawaja missed out on century of his own when he was out caught behind for 89 off 72, an innings that featured 10 fours. The duo batted calmly in the middle overs before exploding in the final 10 overs as Australia looked for late flourish. Aaron Finch (53) finally won a toss and opted to bat first, hitting a half-century in a opening stand of 121 with Warner.

The defending champions were off to a cautious start and Bangladesh captain came close to giving them an early jolt in Warner as early as the fifth over but for Sabbir Rahman who dropped the left-hander at third man on 2. Having settled in nicely, Warner then struck a four and six off successive deliveries from Shakib-Al-Hasan in the 14th over before Finch did the same to Mehidy Hasan two overs later, though in reverse order.

With Bangladesh frontline bowlers causing no trouble, Mortaza turned to Soumya Sarkar who immediately struck with the scalp of Finch in the 21st over bringing a much needed breather. But that was only followed by another frustrating partnership, led by Warner, that set the base for the final total.

The real shift came in the 35th over when Mortaza was dispatched for a four each by Warner and Khawaja. From thereon, it became a one-way traffic with Aussie batsmen belting boundaries at will. Warner, who kept his aggressive side in control for the better part of his innings, shed it after reaching three figures, sprinting to his second 150+ score in world cups – the first batsman to do so. It rubbed onto Khawaja as well who punished Mustafizur with four fours in an over.

After the dismissal of Warner, Glenn Maxwell entered and began scything through the Bangladeshi bowlers, hitting 32 off 7 before a mixup with Khawaja resulted in him being run-out. The manner in which he was going, he was in running for breaking the record for fastest fifty in ODI cricket and his frustration of being dismissed in the unfortunate manner was evident. In the same over, Khawaja too departed, becoming Sarkar’s second victim.

Rain arrived with one over left forcing the players off the field for few minutes but it turned out to be a passing shower. Marcus Stoinis struck two fours in the final over as Australia finished on a high. Kane Williamson has to be New Zealand’s greatest ODI player of all time: Daniel Vettori 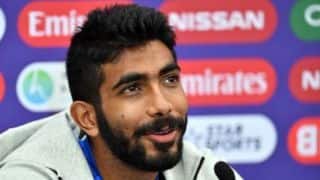