Sam Billings' decision to field in Trivandrum did not go to plan.

India A skipper Ajinkya Rahane extended his impressive List A form by hitting 91 and with Hanuma Vihari (92) and Shreyas Iyer (65) also getting fifties, the home team ended on 303/6  in the second one-day match versus England Lions in Trivandrum on Friday.

England Lions captain Sam Billings chose to field, but after the early extraction of Anmolpreet Singh for 7 the touring team was pushed back by a stand of 209 between Rahane and Vihari. (ALSO READ: Ishan Kishan’s 57 trumps Sam Billings’ 108 as India A beat England Lions)

Rahane’s 91 came off 117 deliveries and featured four fours and four sixes. In his last one-day match in October, Rahane had scored 144 not out off 156 balls to set up India C’s title win in the Deodhar Trophy final.

Vihari made 92 off 93 balls, hitting eights fours and four sixes. Iyer was last out in the 50th over, having smacked 65 from 47 balls highlighted by five fours and two sixes.

Around these three fifties, Anmolpreet, Ankit Bawne (18) and Ishan Kishan (3) were the batsmen dismissed for low scores.

For England Lions, Gregory Lewis (2/61) and Zak Chappel (2/47) were the most productive bowlers.

India A lead the five-match series 1-0. 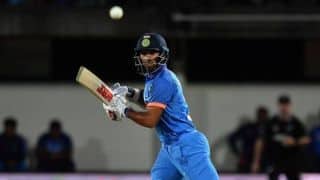