The Delhi Daredevils batsmen suffered another hellish day at work as the Sunrisers Hyderabad bowlers were right on the money from the word go to bowl out the visitors for 80 — the fourth lowest total in the history of IPL — at the Rajiv Gandhi International stadium at Hyderabad. 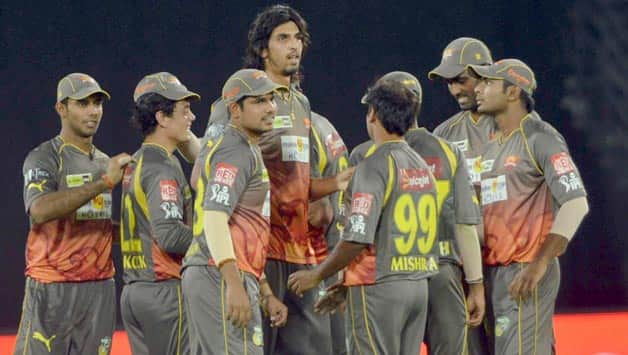 The Delhi Daredevils batsmen suffered another hellish day at work as the Sunrisers Hyderabad bowlers were right on the money from the word go to bowl out the visitors for 80 — the lowest total in the history of this year’s IPL — at the Rajiv Gandhi International stadium at Hyderabad.

The home side started very well with Dale Steyn firing in some unplayable deliveries at Delhi Daredevils’ skipper Mahela Jayawardene. Ishant Sharma was also on target, bowling wicket to wicket and not allowing the dangerous Virender Sehwag to free his arms.

Jayawardene slammed Steyn for a six behind deep square leg in the first ball of his second over and would have loved to continue his glorious form with the bat. However, he fell prey to poor officiating as Asad Rauf adjudged him lbw when the ball hit him outside the line of the off-stump.

Sehwag continued to struggle to negotiate impeccable line and length from the Sunrisers bowlers coupled with some uneven bounce offered by the Hyderabad pitch. He eventually perished for eight off 17 deliveries, giving Darren Sammy his first wicket and a chance to bring out the ‘pacifier celebration’ on the field.

Amit Mishra picked up his first wicket with a wrong ‘un to send back in-form David Warner to put the visitors in deep trouble. At this stage, the Delhi Daredevils were at 52 for four in the 12th over. An over later, part-time leg spinner Karan Sharma took a return catch off his own bowling to dismiss Kedar Jadhav. At the stage, the Delhi Daredevils were reeling at 57 for five with Irfan Pathan and Jeevan Mendis at the crease.

Mishra  — who was picked for India’s Champions Trophy squad earlier on Saturday — kept his form with the ball going as he finished with miserly figures of two for 16 in his quota of four overs.

Skipper Sangakkara utilised medium pacers Thisara Perera and Sammy with great precision as the duo turned out to be more than handy with the ball, chipping into the wickets. Between them, they picked up four wickets each and gave away just 21 runs in 6.1 overs.

Sammy was brought back in the 14th over and he struck again, this time to dismiss Jeevan Mendis. Mendis picked up the slower delivery from Sammy but failed to put enough power behind it and hit it straight to Ishant Sharma at long-on.

Perera followed suit as he bowled a short delivery outside off stump to Botha who took a wild swipe at it to top-edge the ball. Wicketkeeper Parthiv Patel did well to keep his eyes on the ball and take it safely in the end to reduce Delhi to 73 for seven in the 17th over.

Steyn came on in the penultimate over and he struck immediately when he Pathan dragged the first delivery onto his off-stump. He troubled No 11 batsman Umesh Yadav with a few absolute rippers which were too good for the Delhi pacer.

Perera cleaned up Ashish Nehra in the first ball of the last over to bowl out the listless Delhi Daredevils for 80.