David Warner scored a brilliant century before Mohammad Amir took his maiden five-wicket haul in ODIs as Pakistan bowled out Australia for 307.

David Warner scored a brilliant century before Mohammad Amir took his maiden five-wicket haul in ODIs as Pakistan bowled out Australia for 307 in their World Cup clash in Taunton on Wednesday.

In overcast conditions, Pakistan captain Sarfaraz Ahmed expectedly opted to make first use of what seemed like pace-friendly conditions. However, Australian openers Aaron Finch and Warner combined for a dominating century stand to defy the expectations.

Finch, who was dropped on 26, went on to punish Pakistan for their mistake adding 56 more to his total before Amir provided the first breakthrough having him caught in the 23rd over.

The opening stand resulted in 146 runs giving Australia a solid platform. However, the last nine wickets could only add 161 runs as Pakistan bowlers kept chipping away.

Meanwhile, Warner struck continued his good form and came back strongly scoring a century after being criticised for a slow 56 in a 36-run defeat to India. He struck 11 fours and a six in his 111-ball 107 before becoming Shaheen Afridi’s, brought in place of Shadab Khan, second victim.

There weren’t big partnerships following Finch-Warner stand but they were handy enough to push the defending champions past 300-run mark. 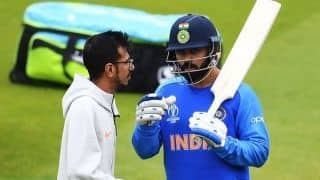