Led by Mathews' third ODI century, Sri Lanka recovered from an early wobble to post 264/7 against India at Headingley on Saturday.

HEADINGLEY: In spite of being knocked out and this being their last match of the World Cup, Sri Lanka continued to punch above their weight, recovering from an early wobble to post 264/7 against India at Headingley on Saturday. ALSO READ: Jadeja, Kuldeep in for India

Leading the revival was their saviour, Angelo Mathews, who struck his third ODI century and on the back of a 124-run stand with Lahiru Thirimanne, offered Sri Lanka hopes of a surprise win over the No. 1-ranked side in the world.

For India, Jasprit Bumrah picked up from where he d left off in Edgbaston. Starting off with a maiden, Bumrah removed Sri Lanka captain Dimuth Karunaratne edging to MS Dhoni his 100th ODI wicket. Kusal Perera had begun with a spanking boundary off Bhuvneshwar Kumar and had added a couple more in quick succession before skying a ball towards mid-on. But a piece of miscommunication between Kuldeep Yadav and Hardik Pandya let him breathe easy.

Fortunately for India, it wasn’t a costly drop and Bumrah scalped Perera inside edging to Dhoni a ball that was fired in at 140kmph. Bumrah was incisive, his first spell reading 4-2-14-2. But his bowling partner Bhuvneshwar was put under pressure going for 36 runs in his first five. If Sri Lanka’s plan was to throw caution to the wind, it backfired terribly.

Avishka Fernando, deemed as the future of Sri Lanka after his phenomenal century against West Indies, struck four beautifully-timed boundaries a straight drive, a cover drive and a couple of crisp back-to-back fours off Bumrah. Contrastingly enough, it was because of a bizarre combination of an upper cut/slice from Fernando that he edged a slower bouncer from Pandya to give Dhoni his third catch.

Ravindra Jadeja took just four balls to get into the thick of things. The ball was given flight, it turned, and Kusal Mendis, who had handsomely guided Sri Lanka to a win over India two year ago in Champions Trophy, danced down and was stumped, resulting in Dhoni affecting the first four dismissals. Sri Lanka were 55/4 and an early end to the innings seemed inevitable.

But two men Thirimanne and Mathews had other plans. They didn’t move quickly but ticked along just about well. The two batsmen took calculated risks and more importantly, saw off Bumrah. It took Mathews 32 balls for his first boundary and another 22 from there for his second before bringing up his half-century off 76 balls. The allrounder took a chance against Bhuvneshwar and Kuldeep and the risks paid off. Bhunveshwar’s off day became even worse when he put Mathews down off Jadeja running in from long-on.

Other than that, Mathews was brilliant. Jadeja, India’s best spinner of the day was spanked for a couple of big ones down the ground along with a boundary, to have his figures spoiled in the last two overs by Mathews. Thirimanne was equally effective. Like Mathews, he took 24 balls between his first and second boundaries but it was again against Bhuvneshwar whom he decided to get a move on. The century-partnership was up between Mathews and Thirimanne with the left-gander creaming two fours in three balls to bring up his half-century.

India had to wait almost 27 overs to get a breakthrough and it finally arrived when Thirimanne, looking to go big, ballooned the ball to Jadeja at backward point to give a returning Kuldeep his first wicket. Kuldeep’s figures might read a tad expensive: 58 for 1, but his tactic against the two batsmen was good. He flighted the ball, slowed it down and had the batmen constantly playing forward.

Despite the wicket though, Mathews ensured the runs kept coming and reached his third ODI century against India with an upper cut. New man in Dhananjaya de Silva raced to 24 off 29. With just one boundary, he highlighted the essence of rotating strike and let Mathews face most of the bowling. Mathews cracked a couple of more boundaries to ensure the scoring rate did not dip much, even though it did take a hit with Bumrah keeping things tight at one end. In a bid to provide a final lift, Mathews gave himself room and slapped Bumrah to covers, bringing an end to his battling knock.

With Mathews’ dismissal, India tightened the screws in the final 10 balls. Bhuvneshwar ended with 73/1 but managed to keep Thisara Perera from exploding by having the allrounder caught in the deep off his final over. 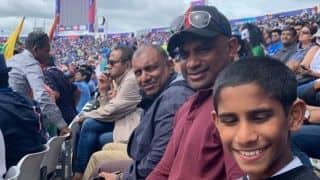